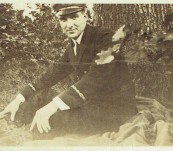 A most interesting collection spanning the years of WWI and shortly afterwards. Taken and compiled by a marine officer, over 180 original photographs, taken with some expertise, nicely presented in its original Morocco bound photograph album. The photographer has presented each photograph framing it within white borders and added very neatly in white a useful description.

The condition of the photographs is good overall, a few are faded or marked in some way from the passage of time, others are crisp and clean. A few have been removed or fallen out and few are loose inside ...we have not studied where they could go ... the album is robust and showing minor age wear, the whole package is very presentable and more or less complete. We wish we knew the photographer ... he was clearly officer material on the Orontes and had a wife and child ... we have included his image as the "thumbnail" ... does anyone know who he was ...?

The album can be split into two distinct periods. The first, before January 1919 being mainly onboard the HMT Orontes a vessel that plied the England – Australia route for the Orient line. With the outbreak of WWI, it became a troop carrier. The photographer appears to have also served on SS Derbyshire in a similar capacity. During this phase he took images of a number of famous vessels used in the war effort and numerous images of views, landmarks, architecture, and the people at various ports of call.

The second element post January 1919 is devoted to a circumnavigation on SS Cufic which head across the Atlantic to Nova Scotia, down to the Panama Canal and across the Pacific to New Zealand and Australia, Durban, Cape Town, and Home.

Examples of the touring images include ...