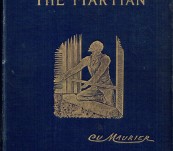 Considered the be quasi autobiographical with a strange surreal Martian twist. The life of Barty Josselin as told by a friend Robert Maurice from early days at the Institution Brossard in Paris. Josselin a good looker and thoroughly talented and extrovert. Later back in England Barty has a spell in the army.

Later his eyesight starts to fail which makes him think of taking his own life. In a dream a spirit guardian in the form of Martia from Mars comes to him. From then Martia inspires him and provides advice which secures his career as an author. Martia has other influences and wishes him to marry Julia ... and all gets a little complicated from there ..