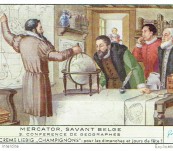 A group of six brightly coloured trade cards by Liebig advertising their tasty products. Produced circa Mid 20thC and in very good condition. Comprehensive text in French on reverse.

Gerardus Mercator (1512-1594) a German-Flemish geographer studied at the University of Leuven. He appears in the matriculation records of 1530 … they still exist! In 1569 he created the principles that we now call the Mercator projection, fundamental to voyagers from that day forward. He produced a magnificent Atlas based on his projection technique and made many fine globes sold to Royalty and gentry all over Europe. Unfortunately, as were the time even though a devout Catholic he was accused of heresy and spent six months in prison. Each of these elements of his life is nicely displayed in this scarce card set.

Mercator … his projection is everlasting