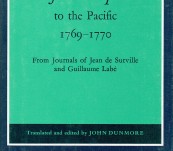 A most interesting Hakluyt production. This expedition, conducted at the time of Cook’s first voyage, had dropped off the radar until the brilliant John Dunmore produced this work based on the journals of Captain Jean de Surville and First Officer Guillaume Labe.

Jean- Francois- Marie de Surville (1717-1770) was a merchant captain with the French East India Company. This was his only exploratory endeavour. He died in Peru without having completed his objective. In 1769 he was given command of the Saint Jaen-Baptiste to look for trading opportunities in the Pacific. He entered the Pacific from the north west and rediscovered the Solomon Islands, then on to New Zealand where he missed crossing paths with James Cook by a matter of days. Crossing the Pacific to Peru was confident in having dismissed the existence of David Land. His crew were in a most unhealthy state with the scurvy and other ailments. He decided not to call at Juan Fernandez and sailed straight to Chlica to get help. The ocean was rough and Surville set off in a small boat which capsized, and he drowned. Command was transferred to Labe. The ship however was seized by the Spanish and held for two years before the vessel and the remaining crew were let go. Roughly one third survived to return to France.

Despite these difficulties (understatement) the journals contain valuable information on the Solomons, observations on pre-colonial Maori society, and extraordinary picture of the hardships endured.