The Descent of Man, and Selection in Relation to Sex – Charles Darwin – 1890 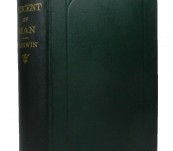 The desired original “Murray”’ green cloth binding as issued with blind stamped borders and gilt titles and banding to spine. Octavo, 693 pages with 78 illustrations. Very clean binding, tight and whilst a little age to page edges a very good copy of desirable edition.

Darwin's classic work on comparative anatomy. By comparing the physiological and psychological aspects of man and ape, he fills in what had been merely suggested in the Origin: that man's ancestor, if still alive today, would be classified among the primates and on a lower scale than the apes.

The last chapter is an added essay on sexual selection, the superior chances of mating that some individuals of one sex have over their rivals. The essay ends with the famous and often misquoted statement, "Man still bears in his bodily frame the indelible stamp of his lowly origin."

It was in this book (page 2) that Darwin used the word “evolution” for the first time.

The Descent of Man Companion to The Origin of Species....