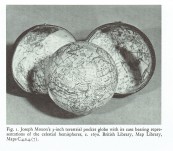 Essays on Chart, Map, an Globe Making in England in the Seventeenth and Eighteenth Centuries.

First edition published by the University of California Press in 1978.

Edited by Norman Thrower who was the Clark Library Professor, 1972-1973. A collection of six scholarly essays by leading authorities, including Helen Wallis the Map Librarian at the British Library.

Octavo, 241 pages nicely illustrated with some images rarely seen because of the focus of the essays. Very good condition.

Special publication worth it for Pepys alone and Moxon’s pocket globe!