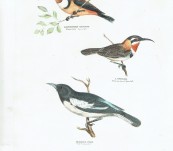 Rare original hand-coloured lithograph by Queensland naturalist Silvester Diggles. Published as part of his magnificent work “"The Ornithology of Australia" between 1866 and 1870 in twenty-one parts by Pugh of Brisbane, in a very limited edition. By the time part sixteen was published there were only 92 subscribers. The original plates were executed by Diggles and his niece, Rowena Birkett.

Silvester Diggles (1817-1880) artist and musician born in Liverpool, England. He came to Australia in 1853 settling in Brisbane where he taught music and drawing. Diggles was a founder of the Brisbane Choral Society in 1859 and the Philharmonic Society in 1861 known as “the father of music in Brisbane”. Diggles was also a founder of the Queensland Philosophical Society and helped establish the Museum. His greatest work was The Ornithology of Australia. However it nearly sent him broke. His health deteriorated worry about finances being a factor. He died at Kangaroo Point in 1880.