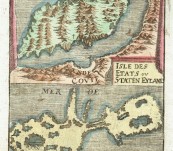 Ostrov Msetnyy is in the Kara Sea south of Novaya Zemlya – Dolgy is to the west in the Barents Sea. The topography of the islands is contrasting Ostrov rather rugged and hilly whilst Dolgy is flat and pitted with lagoons. Sailing vessels very discretely engraved into the plate.

Allain Manesson Mallet (1630-1706) was a French cartographer and engineer. He started his career as a soldier in the army of Louis XIV and became a Sergeant Major and an Inspector of Fortifications a role which afforded him the resources required to produce this treasure.