Richer than All His Tribe – Nicholas Monsarrat – First Edition 1968 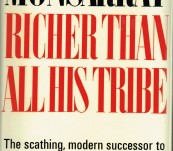 A fine copy of the first edition published by Cassell, London in 1968. Octavo, 369 pages, map of The Island of Pharamaul. A really fresh copy.

Despite fame from “the Cruel Sea” it is widely accepted that amongst his large body of work The Tribe That Lost its Head (published 1956) and this later development of the themes therein Richer Than All His Tribe were his best works.

Monsarrat had spent some time in South Africa as a diplomat and he draws on his experience to write about the obscure colonial island of Pharamual set in the South Atlantic some 500 miles from the South West Coast of Africa. It all starts with Independence Day …