Report to The Council of the League of Nations on the Administration of the Territory of New Guinea from 1st July 1930 to 30th June 1931. 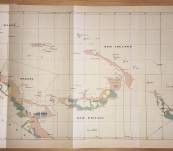 A very good, near fine copy of the annual report on all things New Guinea. The Council of the League of Nations was the first inter-Governmental organisation formed to maintain world peace. It was established after WWI, the consequences of which saw the administration of New Guinea pass from German to Australian hands.

Foolscap, stapled, 130 pages plus large folding coloured map at rear. Printed in Canberra by L.F. Johnston for the Commonwealth Government.

We are always taken aback by the depth and detail of these reports. The key items of interest, we believe, are … the report on the state of gold mining and associated aviation activities … Edie’s Creek was just starting to produce; the District Patrols; the lengthy report from Sir Hubert Murray on his mammoth tour covering 4,440 miles in the steam yacht Franklin … and the super coloured map 72cm by 34cm.