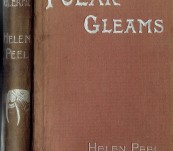 The author Helen Peel was the granddaughter of Sir Robert Peel, twice Prime Minister of the United Kingdom.

With a Preface by Arctic voyager The Marquess of Dufferin and Ava and contributions by Joseph Wiggins and Frederick G. Jackson.

A first edition published in the same year in the UK and the USA. This is the American first by McClurg, Chicago, 1894.

The acknowledged adventurer the Marquess of Dufferin was the godfather of the adventurous Helen Peel. He admired her vigour and abilities in putting together this account of the Arctic voyage of the Blencathra that he provided his esteemed and thoughtful Preface.

From Britain through the northern Norwegian waters, the Barents and Kara Seas, up the Yenisei River to Gol’chikha and back to Archangel in the farthest reaches of Siberia… much interaction with Laps and Samoyeds.

The Blencathra (then named HMS Newport) was built in 1867 in the Pembroke Dockyard. Part of the Philomel class – a wooden screw gun vessel, with a single two-cylinder single expansion, single screw steam engine. She was the first ship to pass through the Suez Canal. She was bought by F.W. Laybourne-Popham in 1890 as a yacht. He had an interest in Arctic waters and appointed Joseph Wiggins as Captain for a voyage, the subject of this book. The whole exercise turned into a commercial one with the organisation of support vessels and the transport of rails for the Trans-Siberian Railway. Later the yacht was used by William Speirs Bruce and new owner Major Andrew Coats to cruise the Arctic as far as Novaya Zemyla and Kolguyev and then Spitzbergen. It was later purchased by the Russians who lost it near Franz Josef Land.