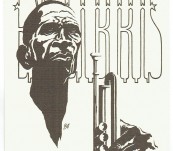 Three original bookplates by three quite different artists, all produced circa 1970’s. All in excellent condition

Earle Backen (1927-2005), books in cubic arrangement. In his time one of the mots respected painters in Sydney. His foundation field was printmaking. In 1954 he won a travelling scholarship and went to London and Paris. 13.5cm x 9.2cm.

Peter Chapman (1925-2016) Blues Player. Chapman born in North Sydney. He became one of Australia’s foremost comic book illustrators including The Phantom Ranger, The Shadow and Sir Falcon. 13cm by 10cm.

James Willibrant (Born 1950) Sydney Harbour. Willibrant was born in Shanghai, returning to Australia in time to study and develop an keen artists talent. Remains very active, his painting are a true delight … look them up. At the time of producing this special bookplate for Pat Corrigan he was teaching art at Chiron College. 12.5cm x 9.0cm. Initialled and dated in the image '76

Joel Elenberg (1948-1980). Totemic form. Born in Melbourne and died very young in Bali. Soulmate of Brett Whiteley and loved by many. Elenberg an accomplished painter drawn later in his short life to sculpture. The form of this bookplate reflects that transition with its angular biomorphic form.

Pat Corrigan having done more to re-stimulate the art of bookplate design in Australia than any other person. The Wiki article on Pat Corrigan is excellent and has an interesting section on his promotion of bookplates.