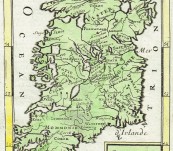 A striking hand coloured original copper engraved miniature map “Royaume d’Irlande” the Kingdom of Ireland, by Allain Mallet published in Paris in 1683 as part of his great work on “the Universe”. One of the most sought after Mallet maps in fine condition.

Allain Manesson Mallet (1630-1706) was a French cartographer and engineer. He started his career as a soldier in the army of Louis XIV and became a Sergeant Major and an Inspector of Fortifications a role which afforded him the resources required to produce this treasure.

The most beautiful map of the Emerald Isle ... every Irishman should have one ...