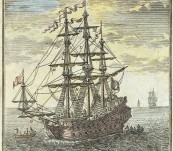 An delightful original copper engraving from 1683. From one of the most magnificent illustrated works of the 17th Century, “Le Description de l’Univers”.

Covering all manner of things naval and cartographic this is a fine engraving of one of the principal ships of the French Navy.

Engraved area approximately 15cm by 10cm. Matted, with "French lines", as shown in the second image.

Mallet (1630-1706) was a French cartographer and engineer. He started his career as a soldier in the army of Louis XIV became a Sergeant Major and an Inspector of Fortifications. His maps have a beautiful decorative and unique style.