Nucleosynthesis in Massive Stars and Supernovae – Fowler and Hoyle – 1964 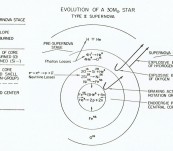 One of the key paper by the “Big Bang’ theorists. Published by the University of Chicago Press 1964. Originally published in The Astrophysical Journal Supplement Series No 91, 1964. The Appendix appeared first in the same journal Vol 132 No 3 in 1960.

Neutrino processes and pair formation in massive stars and supernovae. Introduction to neutrino processes; density-temperature relation for massive stellar cores before implosion; Gravitational and internal energy relations; Nuclear reactions as the source of energy for neutrino emission by massive starts in the super-nova stage; the alpha process in massive stars; the equilibrium process; mantle and envelope explosion. In the supplements … the implosion- explosion case; the internal structure of super-nova; the californium hypothesis etc

Fred Hoyle, Voyager Hero, the greatest man to not win the big prize.

Nucleosynthesis a complex process we all have a stake in.