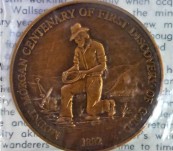 A super example of the interesting medal struck by the Rockhampton Coin Club and made in Brisbane by A.J. Parkes.

An uncirculated commemorative, 40 mm diameter, 40gms in copper alloy. Strong relief and a super example with its original leaflet giving a potted history of the interesting story about the discovery of gold at Mount Morgan which would become one of the then largest gold mines in the world.

The obverse carries a design by artists Don Taylor of a miner / prospector on his knee observing his gold pan with some intensity, other mining accoutrements in the background. On the reverse we have an image taken from a 1908 photograph of the working mine … an image all too familiar to Voyager … see out historic magic lantern slide form that period.

A. J. Parkes originally worked for the Royal Mint in England. He set up his medal business at 3 Gregory Terrace, Brisbane in 1898. He retired during WWII and his business was sold into new hands continuing under his name ... its still going in a slightly different form today.

Mighty Mount Morgan commemorated in medal form, and it deserves it!