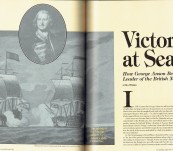 Our favourite features is “Victory at Sea – How George Anson Became Leader of the British Navy”. Having said that, we do not like the title as he became the “Father” of the Royal Navy for many reasons, albeit including the incredible circumnavigation and stealing of the Spanish gold, the story of this feature.

An eight page article nicely illustrated, mostly from images and maps out of the official account. The charming engraving “England’s glory. Wagons heading into the Tower of London with the Spanish treasure” is a very rare engraving the originator unknown.

Provides fresh insight into the voyage particularly as you would expect concerning the charts and the route taken and the mistakes made and bad luck encountered. It is a lesson in the difficulties had before the problem of the longitude was solved by Harrison’s chronometer.

Other articles include quite a bit on underwater surveying … Davy Jones Locker etc and Portlan reflection a good one on early sea charts.

Mercator’s ideas and views on the Anson Voyage.