Maps – A Historical Survey of Their Study and Collecting – R.S. Skelton 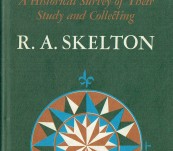 A first edition published by the University of Chicago Press in 1972.

Expert Raleigh A. Skelton (known as Peter) was in charge of the Map Room at the British Museum … he was also Editor of the illustrious cartographic journal Imago Mundi … and worked closely with Tooley.

Unfortunately he passed away before this book was absolutely complete. His notes and extensive references made the final putting together of it an easier task than would otherwise have been.

A super work starting with The History of Cartography – An Introductory Survey; the Preservation an Collecting of Early Maps; the Historical Study of Early Maps … the Past, Present and Future. And a lengthy bibliography of Skelton’s published efforts compiled in chronological order by Robert Karrow