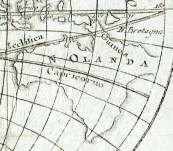 An unusual copper engraved map of the world in two hemispheres by Antonio Zatta published in Venice in 1790.

For the date, post Cook, the depiction of Australia is very strange. Fictitious lines connect Western Australia with the south coast of Tasmania and, from there north east and out to the Solomon Islands and back around to New Guinea. The Gulf of Carpentaria is connect to New Guinea. Australia is named N Olanda. Other curiosities include a strangely drawn Japan and an unnamed Company’s Land peeps out from the extreme north east, for those that are familiar with this curiosity.

The map appears at first rather basic but on closer inspection one can see topographical features, major mountain ranges are depicted and a number of the worlds major river systems. Uncoloured as it should be. Showing some age but a good honest map of some scarcity and peculiarity.

Little is known about Antonio Zatta (1757-1797). Even his year of birth and death, usually quoted as above are challenged in some sources which suggest 1722-1804 … maybe the shorter period reflects his map making activity. We can see that this map is by him as his signature appears in the engraving bottom right … we cannot help feel the plate is based on another map, of smaller scale, usually attributed to Giovanni Rizzi Zannoni, also active in Venice during the period.