Letters From High Latitudes – Earl of Dufferin Governor General of India – From the Library of The Novar of Raith, Ronald Munro Ferguson, to be 6th Governor General of Australia and, who had married the daughter of Lord Dufferin, Lady Helen Hermoine in the year that Ferguson signed the inside of this book 1889. 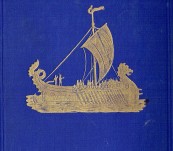 Being some account of a Voyage in 1856 in the Schooner Yacht “Foam” to Iceland, Jan Meyen, and Spitzbergen.

Eighth edition published by John Murray in 1887, London, having been published a number of times since the first of 1857. New editions continued on well into the 20th Century.

Octavo, 248 pages, with frontispiece of the “First Glimpse of Jan Mayen”, and numerous illustrations throughout. Original blude cloth covered boards with gilt device to front, gilt titles to spine. Original jet black endpapers with Ronald Munro Ferguson, Novar of Raith’s bookplate on the front paste down. Also, signed and dated by Ferguson on a blank page before the half title July 27" 89, the year he married Duffrein's daughter ... a wedding gift from the father-in-law?

Written as if a series of lengthy letters. Some unusual introductory content … poem “To The Figure=Head of the “Foam””; list of Dramatis Personae … Protesilaus stumbles on the threshold; the Icelander – a modern Sir Patrick Spens; Loch Goil – the Saga of Clan Campbell; through the Sounds – Stornaway; Out into the North Atlantic and gales and sea sickness – first sight of Iceland, landing at Thule; Reykjavik and buying horses … the lava plateau, mystical mountains, crossing the Arctic Circle; On to Jan Mayen and the volcanic Mount Berrenberg; Sailing for Bear Island and Cherie Island, the Freer Sea, landing at Spitzbergen, English Bay and Lady Edith’s Glacier …

Despite the popularity of the expedition and the book of events this was the only published work of the rather busy Frederick Hamilton-Temple -Blackwood, the First Marquess of Dufferin and Ava of Northern Ireland. Dufferin (1826-1902) was variously .. 3rd Governor of Canada, Viceroy and Governor General of India, Chancellor of the Duchy of Lancaster etc he also held senior positions in the Middle East. Born into wealth he was educated at Oxford. Late in life he became involved in a major financial scandal resulting in the loss of most of his own fortune. He was exonerated of any blame , seemingly.

Ronald Munro Ferguson (1860-1934) was born at Kirkcaldy, Scotland. He attended Sandhurst an after a military career was elected to the House of Commons in 1884. In 1914 he was appointed Governor-General of Australia, forming a close bond with Prime Minister Billy Hughes during the difficult years of WWI. He held office until 1920, the six year term then being a record. Returned to Scotland to become 1st Viscount Novar and Secretary for Scotland. After politics he held Board and Management position in a number of Insurance and banking companies and, was knighted in 1926.

Dufferin in the “Foam” in the cold North … unusual descriptive writing. Exceptional provenance