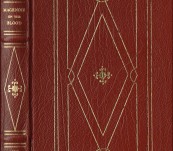 First published in English by Haswell, New Orleans in 1839. This edition for the Classics of Medicine Library published by Gryphon in 1996.

Large octavo, 276 pages, printed by Quebecor Kingsport from film of the original courtesy of the Library of the College of Physicians, Philadelphia. Paper specially made for this edition by Glatfelter. Bound in full leather by the printers. Deluxe endpapers specially commissioned from Richard J Wolfe. All edges gilt, cover design in gilt by Daniel Bianchi and Selma Ordewer

Francois Magendie (1783-1855) was a physiologist and a forerunner of experimental physiology. He conducted dissections on live animals for which he was criticised by many, including later Darwin and Huxley.

Magendie unorthodox but effective experimental physiologist – his thinking and lectures on blood disorders before their time.