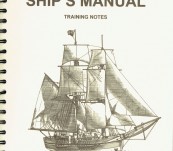 Published by the Tasmanian Sail Training Association in 2003 a first printing.

A Training Manual and guide to the operating systems aboard the Sail Training Vessel Lady Nelson.

Anyone who has been to Hobart has heard of the Lady Nelson a magnificent working replica of her 1799 namesake which had such an important place in Australian maritime history … more so Tasmania.

The original vessel a unique sliding keel design was built at Deptford, London. She sailed for Australia under the command of Grant and was the first vessel to pass west to east through the Bass Strait. Grant completed significant coastal charts of the southern mainland regions … the advantage of the sliding keel was the vessel could get in close in shallow water. Later the Lady Nelson was to play an important part in the history of Tasmania or Van Diemen’s Land as it was then known … including being part of relocation of convicts from Norfolk Island.

The replica is a beauty and the manual does it justice. Just under 200 pages, octavo, spiral bound. It starts proper with a useful history of the original vessel and, the replica which was launched in 1988 having taken two year to build.

The manual comprises sections … Basic re rigging, mooring lines, heaving, helming, knots, lookout duties. Then intermediate ... preparing for sea, sails and handling, anchoring, bells etc, closing down, man overboard! fires. The advanced section … emergency steering, fuels systems, freshwater systems, sullage and bilge, alarms etc. Safety includes first aid and “abandon ship!” … and a final catch-all includes a glossary of terms and a useful “where is it” for those on the find.

A scarce and interesting item the Lady Nelson Manual