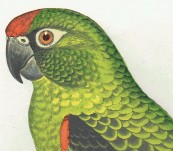 This striking parrot was found and taken back to Scotland by the son of the famous naturalist, illustrator Sir William Jardine. The father categorised it hence it became named after his son … or after him as well really.

Benjamin Fawcett was one of the great colour printers of the 19th century. He pioneered a system of wood block engraving from multiple blocks that resulted in vivid finely coloured works. Fawcett had an association of some 50 years with Francis Orpen Morris to produce many beautiful works on birds. The engravings are the finest illustrations of parrots from the period.