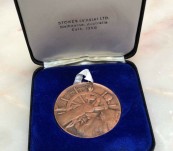 A striking medal issues by the National Trust of Australia in 1970 to commemorate the 200-year anniversary of James Cook’s discovery of the east coast of mainland Australia.

Copper bronze 50mm in diameter, weigh 60gm (160gm cased). Heavy relief portrait of Cook dominates the right hand edge of the medal with the Endeavour helmsman covering the whole of the background … the impression is of is singularly focused observation of the fits sighting .. which would have been at Point Hicks. The narrative James Cook 1770-1970 to the left and below that the signature of the medallist Andor Meszaros. On the reverse the National Trust emblem. A fine example still housed in its original felt lined case all in fine condition. 3,000 medals were cast so it is not uncommon but how many still have their original case and remain unmarked.

Hungarian born Andor Meszaros (1900-1972) perhaps Australia’s greatest medallist. He was a natural sculptor and held high positions in the art in Australia and, recognised by his peers internationally. His name was made as a medallist when he designed the Melbourne Olympic Games Medals in 1956 … he also designed the Australian Vietnam War Medal in 1968.