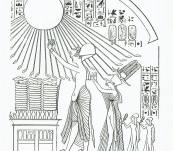 First edition published by Oxford University Press in 1934. Large octavo, 545 pages with 240 illustrations. Decorated cloth covered boards and with most of the rare dust jacket, with repaired separation to rear corner and large chip to base of spine. The book rarely appears with its jacket. A very good copy. A substantial book.

A history of the progress of Egyptian religious beliefs and related mythology during ancient times.

Chapter subjects include … The Religions of Ancient Egypt; Predynastic Cults – Animism – Fetishism – Gods and Goddesses of Fetish Origin etc ; Magic the Foundation of Egyptian Religions; Magical Rituals and Spells; The Magician – His Powers and Works; The Family of Gebb and Nut; Hathor and the Hathor-Goddesses; Gods – Stellar, Borrowed and Foreign; Osiris the Rival of Ra; The Judgement of the Dead; Life Beyond the Grave etc etc

Wallis Budge (1857-1934) one of a group of top Egyptologists to be associated with the British Museum. Born into poor circumstances he made London and the British Museum as a young man. He was so well liked and he was sponsored through Cambridge by Gladstone and Smith (of W.H. Smith fame). He studied the work of Layard, knew Alfred Sayce well (see out original letter by Sayce), learned from Assyriologist George Smith (Voyager hero). It was not long until he was in charge of building the collection which he did in a grand scale. His most distinguished acquisition maybe the Papyrus of Ani “Book of the Dead”. He wrote many books on his subject. This his final and enduring work.

Budge – a lifetime devoted to Egyptology.