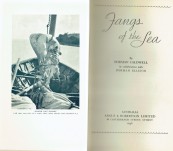 Written in conjunction with Norman Ellison. Published by Angus and Robertson, Sydney in 1936.

Caldwell could see money in catching sharks – his hunting ground was in Queensland between Repulse Bay and Gloucester Island taking in the Whitsundays.

Obviously if you don’t have the appetite for shark hunting this is not the book for you. Caldwell also went after and caught “big Fish” other than sharks and Rays and massive Grouper Fish were within his aim.

The book has taken on almost legendary status and sought after by those with a bit of Hemingway and Lee Marvin in them.

Caldwell’s Fangs one for the game fisherman