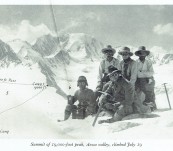 The Journal of the Royal Geographical Society, January 1932, containing a report by legendary mountaineer Frank Smythe relating to the climbing of Kamet, then the highest peak climbed in the World. During the expedition they discovered and named the “Valley of Flowers” now a National Park in Sikkim. Smythe wrote well and his report is a good example of “in the moment narrative” .. you can almost feel the chills. Super images from original photographs accompany this article.

Other articles of substance include, in the Rockies, the confirmation of the Purcell as the source of the Kootenay River and, a traverse through Norwegian Lapland by Charles Elton.

Usual original blue wrappers, good photographs as mentioned and maps for reference. A crease across early pages from storage [priced accordingly], else clean and bright, a worthy copy of a scarce mountaineering report.

Frank Smythe later overshadowed by Everest but up there with the best Mountaineer explorers.