Byron’s Journal of His Circumnavigation 1764-1766 – Edited by Robert E. Gallagher 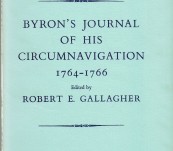 Another well produced piece of work put out by the Hakluyt Society.

John Byron of Wager fame (the poets Grandfather and Voyager hero) has come in for some criticism regarding his circumnavigation of 1764-1776. Hard to understand considering he is in the all time top 20.

Sent by the Admiralty to search for Pepys’s Island and the Southern Continent and then around in the Pacific north to find the “other end” of the North West passage. He re-discovered the Falkland Islands (but was beaten by Bougainville) and when in the Pacific decided for his own reasons (quite valid) to go in a more direct route and all around back to Blighty.

His journal is at the mecca of all journals marine, the National Maritime Museum, London. And, here it is published with super supporting items by editor Robert Gallagher. Much about the giants of Patagonia.

Printed by the Cambridge University Press for the Hakluyt Society in 1964. Octavo, 230 pages with numerous illustrations and maps and charts many folding or multiple folding. A particularly good thoroughly clean copy.

John Byron first the Wager then the Circumnavigation on of the greatest naval heroes of the 18th C.