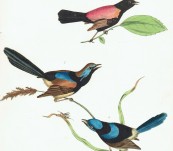 The engraving was published as part of Jardine’s first great work “Illustrations in Ornithology” a now scarce and valuable collection of bird engravings.

Printed on strong paper with a good plate mark, albeit a little tight on the left (32cm by 22cm). Very good condition.

Drawn by William Jardine himself and signed in the plate. This engraving and colouring have a somewhat naive nature which we think gives them a special artistic appeal.

Jardine was the 7th Baronet of Applegirth, Dumfriesshire and founder of the Ray Society. He was a superb artist in his own right but utilised the great illustrators of the day to complete his works including, Edward Lear, Selby, Stewart, Thompson and William Holmes-Lizars

Australian Fairywrens – Three of Them