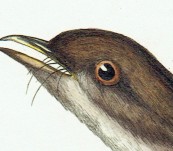 An original hand-coloured engraving of Bristlebird published in Edinburgh 1826 by Scotland’s greatest naturalist Sir William Jardine (1800-1874). This image is one of the earliest fine engravings of the bird. First found and described by Latham around Port Jackson in 1801.

The engraving was published as part of Jardine’s first great work “Illustrations in Ornithology” a now scarce and valuable collection of bird engravings. Printed on thick wove paper (30cm by 23cm) with a strong plate impression, good strong colouring and generally clean condition. Would frame up nicely for display.

The Bristlebirds are named after the stiff “’hair like” feathers that arise around the beak. They are thought to assist in catching insects upon which they feed and also provide protection to the eye. There are a number of sub-species of the Eastern, Rufous and Western Bristlebirds. Subclassifications of those number six of which one is extinct, one critically endangered and two endangered and the other two on the way. Bush fires and land clearing the main culprits.

Jardine was the 7th Baronet of Applegirth, Dumfriesshire and founder of the Ray Society. He was a superb artist in his own right but utilised the great illustrators of the day to complete his works including, Edward Lear, Selby, Stewart, Thompson and William Holmes-Lizars

Early engraving of the endangered Australian Bristlebird … help to save them