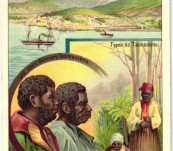 A group of six decorative trade cards by Liebig advertising their tasty Bouillon Oxo. Printed and issued around 1910. In French with a very good description the rear of the card … a good language lesson.

Delightful chromolithographs depicting scenes from around Australia including a nice one of Hobart, Tasmania with Storm Bay (not quite technically correct as we are now in the Derwent proper) and Mount Wellington covered in snow in the background. Also, we have the Murray River and its vegetation; the Kimberleys; Rundall Creek in the MacDonald Range; the Blue Mountains west of Sydney and Coolgardie and its Gold. Images of indigenous people from various parts of Australia given the French romantic treatment in terms of their clothing. Each 10cms x 7.3cms.