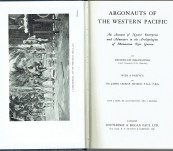 An account of Native Enterprise and Adventures in the Archipelagos of Melanesian New Guinea.

A richly illustrated account of the ceremonial exchange of manufactured shell valuables linking the Trobriand Islands with other island groups in Eastern New Guinea. Malinowski follows a canoe voyage around the Kula ring of islands.

Following and introduction about subject, method and scope which is regarded as some of the most influential pages in the field of social anthropology .. Malinowski explores the country and inhabitants of Kula; the Natives of the Trobriand Islands; Canoes and sailing; Ceremonial Buildings at Waga; Ceremonial Visiting; an Overseas Expedition; the Fleet at Muwa; Sailing to Pilolu; a Shipwreck; in the Amphlets – the Sociology of the Kula; Tewara and Sanaroa- mythology; the beach at Sarubwoyna; the journey Home; the return visit of the Dobuans to Sinaketa; Magic and Kula; the Power of Words in Magic; Expeditions to Kiriwinan d Kitava …. The meaning of Kula.

Brian John Egloff an American born anthropologist spent time in New Guinea, holding senior position in the then newly established National Museum. Later in Australia he rose to be Associate Professor of Cultural Heritage Management at the University of Canberra

Malinowski a pioneer in the field of social anthropology and perhaps not yet eclipsed and, the most interesting of subjects.