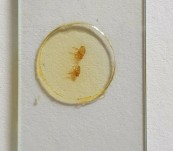 A very nice example prepared by E Bryan Optician of Manchester, England [Not in Bracegirdle]. Bryan operated at the premises in 24 Cross Street c1900. The slide carries his label and a brief subject description.

The Human Flea (Pulex Irritans), an interesting Latin name, is happy on a number of hosts not just humans. It was thought to have originated on South American Guinea Pigs. The female burrows into the flesh particularly around the feet and ovulates internally.

Antique He and She Flea