The Great Age of the Microscope – Professor Gerard L’E Turner 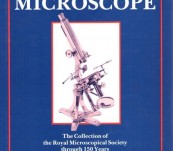 One of if not the book on the development of the microscope. Issued as a celebration of the then 150-year-old Royal Microscopical Society and based on its irreplaceable and undisputably best collection in the world.

The author, Gerard L’E Turner was Professor of the History of Scientific Instruments at Imperial College, London – what job! He was a Research Fellow at the Science Museum and one time President of the esteemed Royal Microscopical Society.

The Society was formed in 1839 and every instrument they purchased, from the very first that year, is still held by the Society. This book covers over 450 prime examples starting from those made in the early 1700’s.

After preliminary explanations on instrument development and the formation of the Society we have ... Compound early 17thC; Culpeper style; Cuff style; Gould type; Powell and Lealand; Ross; Smith and Beck; Swift; non British; Projection; Reflecting and then a plethora of associated instruments.