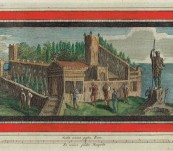 The engraving was included in set of rare books entitled “Le Antichita di Ercolano Espotse” (the Antiquites discovered at Herculaneum) published under the command of Carlo II, King of Naples. They were printed by the Royal Printing House in Naples between 1755 and 1792, This production was the first item published on the excavations and made a major contribution to the formation of the neoclassic style which spread over Europe in the 18th and 19th centuries.