In Search of Franklin – The Journal of Rochfort Maguire 1852-1854 … Two Years at Point Barrow, Alaska, aboard HMS Plover in the Search of Sir John Franklin – Edited by John Bockstoce 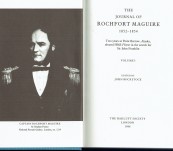 A Hakluyt Society publication in two octavo volumes published in 1988. 584 pages in total heavily illustrated and in fine as if new condition. There is a super large scale folding map on the Western Esquimaux by Simpson which we have difficulty scanning nicely because of its size.

Of further interest is that this expedition approached from the west whereas analysis of the search for Franklin has tended to focus on eastern approaches. The heart of this book is based on the journals of Captain Rochfort Maguire and it represents the earliest account of sustained contact with the Eskimos of northern Alaska. A detailed introduction regarding the history, strategy and logistics of the search and the conclusion supplemented by other accounts of Dr John Simpson who participated in a five boat expedition from Point Barrow.

Search for Franklin – First from the West