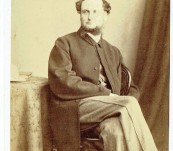 Samuel Whitchurch Sadler was a prolific writer of maritime adventure stories of the period. Quite a number involved slave ships … The African Cruiser; Slavers and Cruisers; The Good Ship Barbara; The Flag Lieutenant and our favourite The Ship of Ice. The Marine Society is the World’s oldest Maritime Charity. Formed in 1756 at the Kings Arms Tavern, Cornhill London. The objective of the charity … to train and improve the lot of young men, often orphans, and train then up, cloth them etc so they had more chance of survival in the Navy.

The photographer was William Trindall, an Oxford born “photographic artist” who was operating out of premises in the Docks at Pembroke from 1868. A previous owner has written 1864 on the reverse … this might be a tad early.