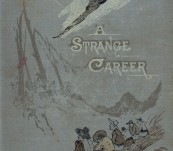 John Gladwyn Jebb led as an adventurous life as could be possible. This book was compiled by his widow and carries the introduction of none other than possibly the greatest adventure writer H Rider Haggard.

English born Jebb’s adventures began as a military man in India. Soon he was conducting privately funded explorations into Central and Southern America. Involved in numerous business dealings… helped to start White Line … was in involved in armaments. He moved to the US and the Wild West … bear hunting, gold mining and a few conflicts with local bandits and Indians. Off to Mexico to make his fortune gold mining (made it and lost it) and much of the later part of the books is about his times in Mexico padded a bit with history of the region.

Published by Blackwood, Edinburgh in 1895 octavo, 271 pages, frontispiece of the great man, illustrated in a Victorian way by John Wallce. Pictorial boards nice but rubbed especially at the tips. Overall, still a particularly good copy of a book rather hard to find so.