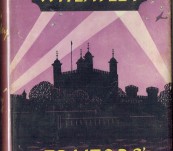 First edition published by Hutchinson, London in 1958. One of Wheatley’s classics.

Octavo 383 pages with a special dust jacket design by Sax. That design is repeated as a front board decoration. End paper plan of Budapest and a schematic of the Tower of London.

One of a series on novels concerning the famous secret agent Gregory Sallust. Set in Budapest in 1942 where the effects of the war had yet to fully felt ... still time for gaiety and laughter. The main plot centres around how the enemy were so brilliantly misled regarding the Allies intentions in North Africa.

Dennis Wheatley established a cult following during his lifetime. He was hugely successful and bought a “Georgian Pile” in Hampshire were he kept a very large collection of rare and antiquarian books … his appetite for serious historical memoirs is reflected in the depth and solidity of his writing.

Wheatley in Budapest during WWII – dressed by Sax