Through a Land of Promise – With Gun, Car and Camera in the Heart of Northern Australia – Michael Terry – 1927 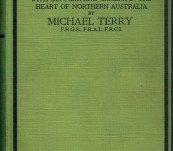 Self described “The Last Explorer” Michael Terry began his Australian adventures in 1923. This is his second book of five accounts of his extensive travels in Australia’s most difficult terrain. Scarce and sought after..

Published by Herbert Jenkins in 1927 a first edition. Royal octavo, 336 pages with map and 60 plus plates. Very good condition.

From Katherine in the Northern Territory to Broome in Western Australia [The Northern Territory boundaries were only re-established in 1931 – hence the title could confuse some]. An unusual journey not only for the odd bunch of chaps who went along… Lord Apley etc … Terry had his sponsors to deal with. Other maybe more qualified. Much detail and a curious writing style that begs to be read. As with all of Terry’s books a sound source for information and images of the aboriginal people of the region.

Michael Terry (1899-1981) was born at Gateshead on the other side of the river at Newcastle- Upon Tyne, England. He learned to drive in WWI. He was captured in Russia and later released. Not too good from the experience he was advised to seek warmer climes and made his way to Australia, first in Perth then in Queensland from which he launched this original venture, before honing in on his favourite North Western region.

He had tried to get sponsorship from Henry Ford which was not forthcoming. Returning briefly to England he published this book, lectured at the Royal geographical Society, winning the Cuthbert Peek award. Through these endeavours he garnered enough finance to return Down under and continue his exploits with both motor vehicles and perhaps more practical camels. He featured on the bicentennial commemorative $10 note with his favourite camel “Dick”.

Michael Terry on of the last adventurers and “obviously” a good mechanic.