The “Widow’s Cap” of the Australian Aborigines – R. Etheridge 1899 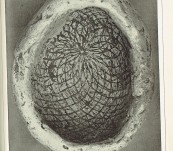 Separately published paper from the Proceedings of the Linnean Society of New South Wales 1899. By Robert Etheridge Junior who was then Curator of the Australian Museum. Son of the superb engraver of geological specimens and exceptional geologist in his own right.

Side stitched in the original light blue wrappers, a little aged, internally very clean … a very nice copy of a little understood custom.

Mitchell was the first to notice the widow’s caps which he observed during his second expedition into the interior. Worn by widows in mourning and then later left at the graves of the deceased. The caps were formed from clay and the widow wore a net over her hair which left the unusual impression that can be seen in one of the images provided.

13 pages on narrative and six plates, printed on heavier stock from photographs of examples.

An authoritative paper on an important aboriginal custom