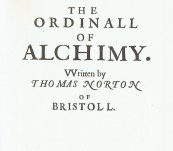 Published in 1928 by Edward Arnold, London, a facsimile from Theatrum Chemicum Britannicum with annotations by Elias Ashmole, and a modern introduction from expert E.J. Holmyard.

Octavo, vii, 125 pages with reproduction of the unusual plates from the 1652 Theatrum. Dust jacket chipped but a rare thing. Super scarce book in any event.

This is a book about alchemy … making gold and other things precious. It was in the 12th Century (1144 AD to be more precise) when Englishman, Robert of Chester translated … the "Book on the Composition of Alchemy" from Arabic ... it had been brought by the Moors to Spain. The subject was studied and lampooned (Chaucer – Tale of the Chanon’s Yeomen) for centuries.

The Ordinall is a remarkable work. Fifteen years after the death of Chaucer the alchemist George Ripley was born. He belonged to the Abbey of St Augustine in Bridlington. He came to train Thomas Norton in the early 1400’s. Norton arrived at the knowledge of the method of preparing the Elixir of Gold at the age of 28. He wrote the Ordinall of Alchim, De Transmutatione Metalloraum and De Lapide Philosophico. They were manuscripts, not printed works, and a few copies were made by scholars.

The manuscript was printed in book form for the first time as part of the Theatrum. Ashmole (Of Oxford Library fame) took a great interest in its content and well as its secretive construction.

A lengthy poetic work is constructed with preliminaries and seven chapters .. the authorship which has been constantly in an out of doubt is revealed in a curious way. Ashmole notes … from the first word of the Proeme and the initiall letters of six following chapters (discovered by acromonosyllabiques and Sillabique Acrostics) we may collect the author’s name and place of residence … “Thomas Norton of Briseto, A parfet Master ye maie him call trowe”

The story is really quite more readable than this extract suggests. We learn about Norton’s life and how he came about gaining the trust and information from his mentor. Other secrets regarding the mastering of the changes pursued in base to precious are hidden within the text … we will not reveal them here.

Making Gold has never been so easy or rewarding