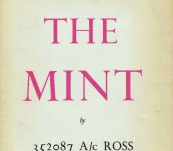 Published by Jonathan Cape, London in 1955 a first edition. Pretty good condition with some age to the top edge and the usual browning round the edge of the all important unassuming dust jacket. Very clean internally.

In 1922 Lawrence of Arabia joined the RAF as John Ross on discovery of his identity he was discharged but later allowed to re-enlist as Shaw. This is his diary as Ross. 1955 First Edition.