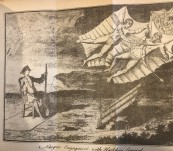 Two volume set published by Reeves & Turner, London in 1884. Originally published in 1752, the author Robert Patlock, being ab attorney of Clement’s Inn, London. A magnificent fantasy travel novel up there with Gulliver’s Travels and Robinson Crusoe with echoes of both. Much admired by Arthur Southey, Charles Dickens, Thackerey, Coleridge, Walter Scott et al.

Octavo, Vol I xxxii, 172 pages; Vol II xii, 300 pages including a glossary of new words and names invented by the author … super.

Bound in half morocco, gilt title and ornaments to compartments to spine, quite rubbed. Paper covered boards, endpapers and page edges all marbled to the same effect, internally clean. Carries the very discrete embossed stamp of the Reform Club, a rather special establishment.

With special illustrations, one double page folding, which demonstrate the unique wing like features of the “flying people” … or Gawry [Women] and Glums [Men] … maybe pun intended.

Shipwrecked near the South Pole, Peter Wilkins makes his way through a subterranean cavern to a hidden world where he meets the flying people. He saves and marries a Gawry, and much adventure ensues full of unique invention and culture. All of this is narrated to a passenger on the ship Hector from the very south of South America …

Good copy of the amazing exploits of Peter Wilkins.

Worth mentioning the Reform Club, one of London's poshest. Formed in the 1830's. It has an association with many literary greats and their scandals ... Wilde etc. Of relevance to this work another great world traveler Phileas Fogg of Jules Verne fame was a supposed member.