The Geological Evidences of the Antiquity of Man. With an Outline of Glacial Post-tertiary Geology and Remarks on Theories of the Origin of Species with Special Reference to Man’s First Appearance on the Earth 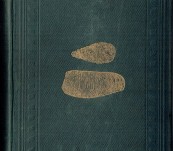 A fourth English edition, much revised, published by John Murray in 1873. The first three being all in 1863. Thick royal octavo, 572 pages illustrated throughout. In the original binding with the gilt fossil device to front. A very good copy.

Carries the bookplate of John David Hope, from the great Scottish Lowlands family of that name, that for centuries have made their money from banking, the law and politics and owning loads of property. Related to the first Governor General of Australia, John Adrian Hope. The family motto is a good one “At Spes Non Fracta” – “Yet my Hope is not Broken” … a little corny. The heraldic emblem includes a broken terrestrial globe above which is a rainbow emanating from clouds on either side … describes their position quite well we think.

Scottish geologist Charles Lyell (1797-1875) brings a geological approach to this debate on the origin and age of mankind. Embracing Darwin’s theory of evolution, he references Lamarck, Chambers, Darwin, Wallace and Hooker. A comprehensive and careful review of fossil evidence with interesting evidence of man living in Europe among ancestors of elephants, rhinoceros and hippopotami. The age and development of languages in man are considered and the all important issue of the day .. could man be placed among the apes?

Lyell in there with Darwin and Evolution