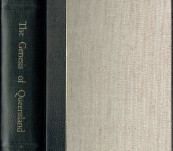 Quality 1989 facsimile of the Queensland Classic first published 1888. An account of the first exploring journeys to and over Darling Downs: the earliest days of their occupation; social life; station seeking; the course of discovery, northward and westward; and a resume of the causes which led to separation from New South Wales. With portrait and facsimiles of maps, log etc.

Henry Stuart Russell (1818-1889) was born in England the son of an East India Co officer and went to Harrow and Oxford. At 22 he migrated to Australia first to Sydney and then to stations in New England and the Darling Downs. In 1842 he and Andrew Petrie went by whale-boat from Brisbane up to Wide Bay looking for sheep country – they discovered the Mary River. Later that year on a similar expedition he discovered the Boyne River which resulted in Russell taking up Burrandowan Station and Cecil Plains (which was visited by Leichhardt in 1844). His pastoral career ended in 1849. He became involved in the move to make Queensland a separate colony – he later moved back to Sydney and England were he died after completing “The Genesis of Queensland”

Must have title any Queensland Collection