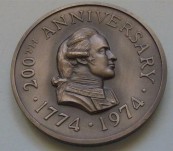 On his second voyage to the Pacific, James Cook discovered Norfolk Island on the 10th October 1774. He named it after the Duchess of Norfolk, wife of Edward Howard the 6th Earl.

Fine portrait of James Cook with 200th Anniversary 1774-1974 around. On the reverse a map of the island with higher regions marked in relief and a huge Norfolk Pine, one of the great attractions of the island, for ships masts. Cook’s landing point, on the north shore, is marked as is the line of latitude 29 degree south. Also a fine image of Cook’s vessel HMS Resolution. Narrative details of the discovery complete the surround.