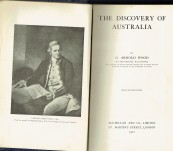 First edition of Arnold Wood’s broad and well researched book about the European discovery of Australia. Published by Macmillan, London in 1922.

Despite the Cook frontispiece there is much about the pre-Cook era.

Thick octavo, 541 page well illustrated and with folding map at rear. “Presentation Copy” blind stamp on title which might explain the rather drab blue cloth covered binding, with gilt title to spine which does not appear as a published standard. Binding a trifle rubbed up join, internally clean, still a good to better copy.

Oxford educated Wood was offered and took up the Chair of History at Sydney University in 1891 and was still there at time of publishing this book.

The contents commence with Ancient and Medieval conceptions of the Land of the South; the Indian Ocean in the 13thC; the successors of Marco Pol; Portuguese and Spanish; was Australia known in the 16thC; the discovery of the Solomons; the voyage of 1595; Quiros; Torres; the Dutch and Tasman in 1642 and 1644; Dampier and the Roebuck; the Precursors to Cook; the Endeavour Voyage and the discovery of Eastern Australia; Successors to Cook …

One of our favourite “histories” with much on the early era accompanied by good illustrations many from rare early maps.