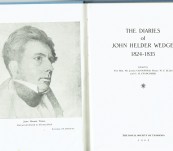 A first edition published by the Royal Society of Tasmania in 1962 much credit given to the North-West division.

Very few early diaries exit from this period. The fact the Wedge meticulously made records of every day makes this account most readable and rewarding.

Norn in England in 1793 youngest son of Charles Wedge a leading surveyor of the day. John Helder Wedge assisted his father and brought his skills to Van Diemen’s Land where he arrived in the thick of it in 1824. He settled on land near Perth just south of Launceston where he was granted land by Sorell. He began to ply his trade which meant travelling the length and breath of Tasmania. There are many interesting points of detail ... the Church in Launceston has not been built square to the roadways so Wedge is asked to change the street plan which he duly does … he gets called down to Hobart, as the Van Diemen’s Land Company has been formed under Charter and he is required to assist in the surveying of the allocated pastures which takes him up to the North-West and area he becomes most intimate with.

The book is nicely set out and put in context. We start with the background of Wedge; the forming of the Van Diemen’s Land Company; the Survey Department; Exploration; Land Settlement; Bushrangers and the Aborigines … before the diaries in full followed by research notes, a bibliography and useful index.

Wedge made an early impact and left a lasting record