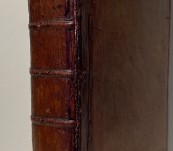 A fourth edition; with large Additions and Amendments, and the Precedents in English. In the Savoy: Printed by Henry Lintot for Woodward, Browne et al. Thick octavo, 522 pages after preliminaries bound in polished calf, red leather label worn. The odd manuscript note including some land prices for 1749. Good antiquarian patina.

Giles Jacob (1686-1744) was an early legal writer of note. This was his first work the first edition published in 1713. He wrote numerous legal works all of which were quite popular. He also wrote poetry and plays lampooning Alexander Pope’s “The Rape of the Lock” with his “the Rape of the Smock” rather low and bawdy. For this and similar reasons he raised the ire of Pope who included him in his ‘the Dunciad” of 1728 … quote “Jacob, the scourge of grammar, mark with awe … Nor less revere him, blunderbuss of law”

Otherwise the book was held in high regard for its ease of understanding … not common in the period. Set out in five broad sections.

First, The Nature of Courts Leet and Courts Baron; with a general Introduction to every thing incident to them, according to Law and Custom.

Secondly, The manners of holding Courts Leet, Courts Barron and Courts of Survey, with the Charge to the Juries; and the Form of Entring those Courts in the Minute-Books and in the Court-Rolls; with Precedents of great Variety of Presentments, Amerciaments, Estreats, Copies of Court-Roll for Life, and in Fee; Grants, Surrenders, Admittances, Licences, Forfeitures, and all other Proceedings of that Nature.

Thirdly, The Manner of Keeping the Court Barron for trying of Actions; the Nature and Kinds of Actions, and of the Pleadings; and Precedents of Declarations and Pleadings, and of Process from the Precept or Original to the Distress or Execution; with Pleas and Recoveries concerning Copyhold Lands.

For those curious, an Amerciament is a punishment at the discretion of the Court and an Estreat is the copy of a Court Record enforcing a fine of forfeiture. Entring is not a misspelling … Entring-Clerks had a role in the legal fraternity of the period.